Tony ran for Mayor in Sydney in 1999 and 2004 with his “Spanos in the Works” motto he flipped the script on mayoral election methods utilising sound systems, D.J’s and party style posters to promote his libertarian mantra.

On 27th March 2004 Tony Spanos was in the running for the Sydney’s mayoral elections, in three areas, North, City and Bondi/Waverly with the message “Come to the party”, “Reclaim Sydney” for the good of all. 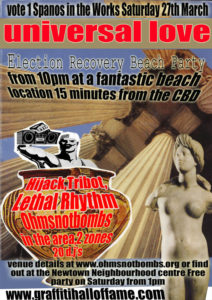 A section of a Spanos in the works press release…

Tony Spanos sees himself as a locksmith opening the door for the community to have a voice; his mayoral campaign is based on ideas and initiatives not on personality cult.

Mr. Tony Spanos over the last two decades has made the best of his
situation as a business operator in South Sydney’s Alexandria to co-
ordinate a grassroots youth service with his now closed venue “Graffiti
Hall Of Fame”. During his time at the Botany rd. address Tony had launched numerous projects aimed at encouraging youth creativity and self esteem, he kick-started a myriad of creative mural projects, community music events and cross country environmental tours and sponsored many local sporting groups including several indigenous teams based in Redfern.
Tony’s mural project was very active in the early nineties uniting street artists and negotiating legal avenues for their work which is in evidence around the inner city, many murals like the Newtown “I Have A Dream” Martin Luther King painting have become much loved by the local community.
The rezoning of industrial to residential in South Sydney set in motion a lucrative market for developers, Tony Spanos and the Graffiti Hall of Fame community were victimised into closure, legal battles trying to retain the community youth centre took its toll financially and led to its closure. Why are our spaces being closed down while an endless labyrinth of apartments fill our urban landscape devoid of healthy recreational facility’s.
Vote Spanos on March 27th for Youth Encouragement, Social Justice and No Corruption. He is running on a platform of bringing people together, community consultation and empowerment, running an open council, people before profits, alternative public transport and Earth friendly technology so make your vote count and come to the party midday March 27th in Newtown and live the dream for a sustainable future.